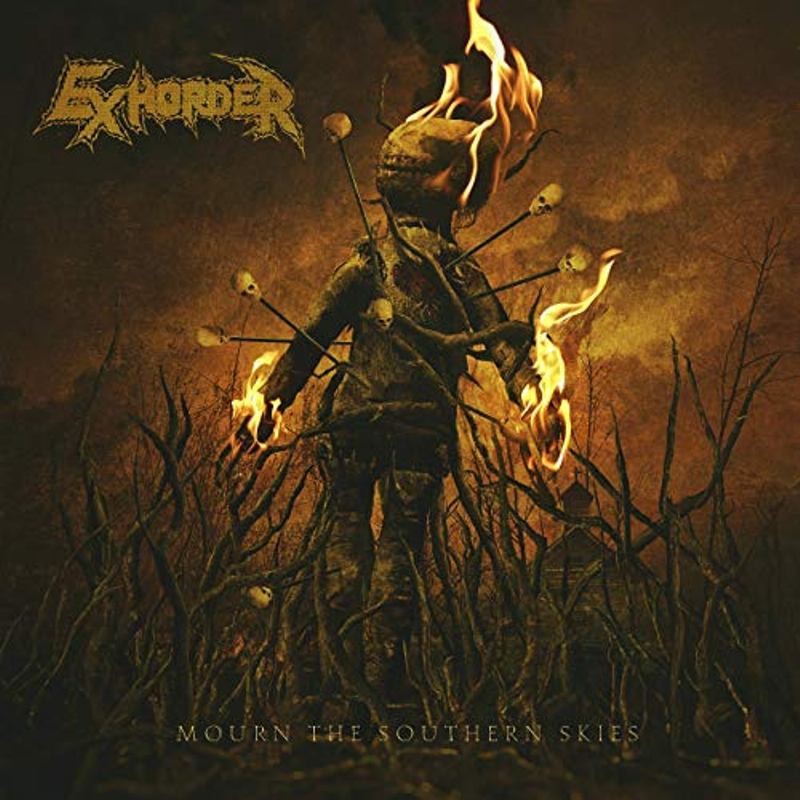 Exhorder is back! With a generous and clever monster of an album!

From the opening of the first track of »Mourn The Southern Skies«, we are reminded immediately just what EXHORDER is exactly through the spitting rage 'My Time' forces upon our ears. It is evident that the anger remains prevalent, with perhaps a different point of view that younger men could not possibly have understood on earlier albums. Sasha’s energy and punk influence fire the engines, with Jason locking down the foundation tightly. Vinnie once again has proven himself “The Godfather” of thrash riffs, which cut through like a high speed drill bit thanks to the stellar production. A lead guitar face-off in the solo not only exhibits Vinnie’s sometimes under-appreciated skills as a shredder, but also showcases newcomer Marzi Montazeri (“The High Priest Of Distortion”). If anyone ever doubted EXHORDER’s skill set regarding guitar soloing, those days are gone forever! And finally, as if riding a runaway garbage truck with fireworks exploding off of its roof top, Kyle invokes venom and energy with familiar passion. All in all, the truth is apparent - EXHORDER mean business once again!

From there, »Mourn The Southern Skies« never lets up. A broken elevator hell ride ensues, returning to groove elements and back to speed yet again. Headbangers will love the plowing force of 'Asunder,' 'Hallowed Sound,' and the double-bass attack of 'All She Wrote.' Speed freaks will get their fix from 'Beware The Wolf,' 'Rumination,' and a special re-recorded version of 1986’s 'Ripping Flesh.' This cut features original EXHORDER drummer Chris Nail on drums as a throwback to the past, and a nod to long-time fans. The album culminates into a doom inspired adventure with the title track. Sailing forth like a steam ship down the mighty Mississippi River, 'Mourn The Southern Skies' displays a side of EXHORDER that picks up where 1992’s '(Cadence Of) The Dirge' left us. Slow, memorable riffs and soaring vocals create hooks baited with crippling emotion. The startling presence of a B-3 organ is quickly understood, testifying in a resolution of gospel proportions. It is nearly impossible not to be enlightened by the song’s finale.