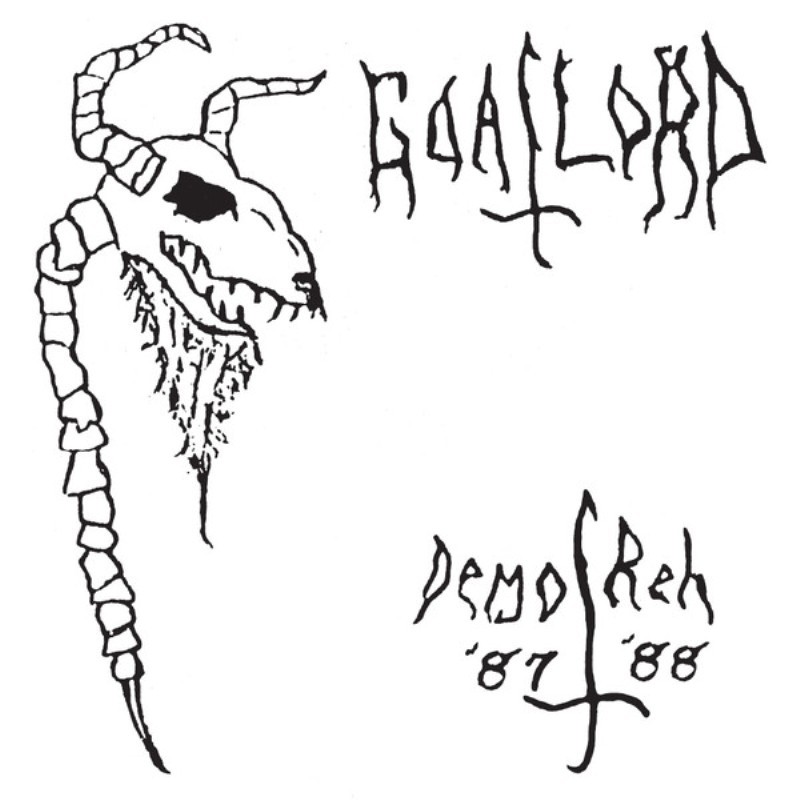 In 1985, Goatlord emerged from beneath the desolate sands of the Mojave desert and released their first demo two years later, following the replacement of their original bassist. Though the band would ultimately become best known for their first full-length album, “Reflections of the Solstice,” it was on this first recording, known succinctly as “Demo '87,” that they established the prototype for the primeval sound that would eventually come to characterize them as one of the most unique bands to ever emerge, not only from the depraved setting of Las Vegas, but also from the U.S. metal underground as a whole. The tracks on Demo '87, which most obviously reflect the band's primary influences from the revered likes of entities such as Hellhammer and Sodom, were clearly a necessary stepping stone in the descent towards the black doom death rituals that would later become further explored on subsequent recordings. In comparison to the later versions of the same four songs, the Demo '87 tracks are relatively shorter, more concise, and noticeably faster, thus serving as a testament to a band that was still working to define its own sound.

In the months that followed the original release of Demo '87, the band revisited this same material and accentuated its more doom-laden aspects, which effectively lengthened the songs and augmented the thrashier original versions with elements derived from other musical influences such as Pentagram and St. Vitus. In addition to the reworked tracks from Demo '87, the band also wrote and rehearsed a significant number of new songs, which were also to follow in the same new vein.

With the greatest of personal pleasure and pride, Nuclear War Now! announces its re-issue of the complete, original Demo '87 in conjunction with a first-time release of a 1988 rehearsal recording that exemplifies Goatlord's majestic devolution. The “Reh. '88” recording, which until this point was unavailable to the public, was unearthed and graciously offered by Don of the Dead (Nunslaughter), one of the earliest and most fervent worshipers of this black doom cult. “Reh. '88” is heretofore likely to be considered the most primitive document in the band's archive. On this recording, Ace Still's vocals are particularly possessed, as if they are being dry-heaved forth from the partially decayed larynx of an undead being. Additionally, this recording offers a rare and intriguing window into the rehearsal room and perhaps provides more concrete evidence of the band's known penchant for mind-altering chemicals, as demonstrated by the awkwardly confused reference to “Twilight Rem” by an unidentified band member just prior to the six-minute mark of “Distorted Birth.” Finally, this release features the original cover artwork from Demo '87 and as a bonus includes alternate versions of “Chicken Dance” and “Voodoo Mass,” taken from the recording session of Reflections of the Solstice, also to be re-released by NWN!

Track 12 from the Turbo Records version taken from Reflections Of The Solstice with chickens.

Track 13 is the JL America bonus track with Chris Gans on vocals.