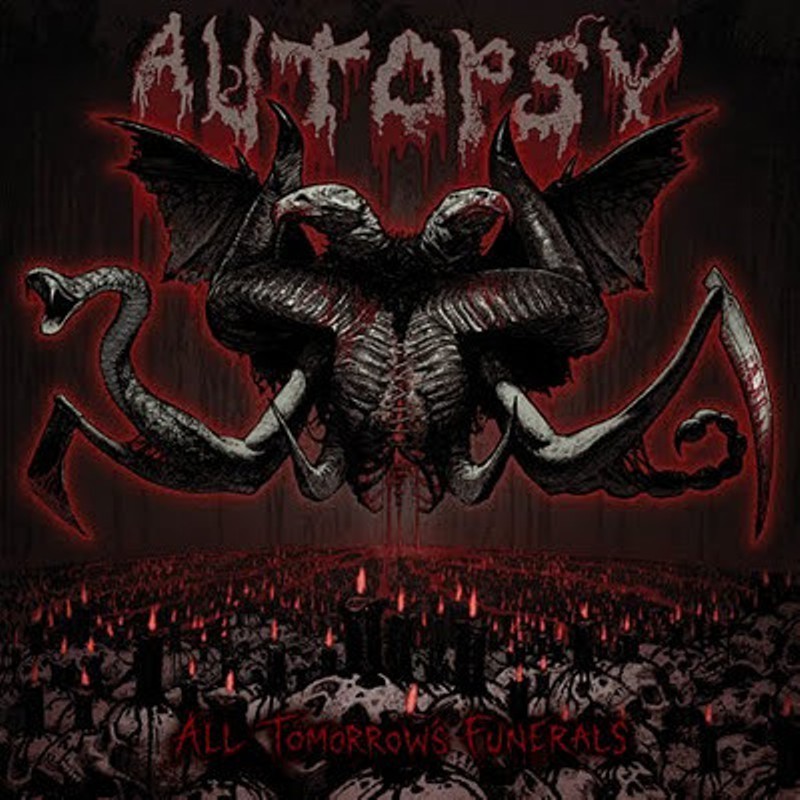 This edition of 'All Tomorrow's Funerals' is presented on double gatefold vinyl.

One of the early breed of US death metal acts, Autopsy formed in 1987 in San Francisco, and released 4 albums on Peaceville Records - beginning with the classic debut 'Severed Survival' in 1989 - before disbanding in 1995, with members going on to form Abscess. Autopsy triumphantly and officially returned from the grave after a 15 year hiatus with the 2010 EP, 'The Tomb Within' delighting critics and fans alike, followed by 'Macabre Eternal', the long-awaited and rabidly received fifth album in 2011, with the original trio of Chris Reifert, Danny Coralles and Eric Cutler joined by Joe Trevisano of Abscess/Von fame on bass.

'All Tomorrow's Funerals', is the latest chapter in the history of the death metal legends. This monstrous release contains new studio tracks recorded late 2011 - including a re-recorded version of classic oldie 'Mauled to Death' - plus all of Autopsy's past EP's and rarities which have been specially remastered by the band themselves, totalling 22 tracks all together, resulting in over 73 minutes of sickness. Everything from 'Retribution For The Dead' and 'Fiend for Blood', to the now sold-out 'The Tomb Within' is present, including liner notes from the band and new cover art from renowned artist Matt Cavotta (also responsible for the 'The Tomb Within' cover).

Autopsy notably features legendary drummer Chris Reifert, who began his recording career with US metal greats, Death, before taking on the unusual duty of handling drums and vocals for Autopsy. Autopsy has influenced a whole generation of extreme metal bands, from Entombed and Dismember to Darkthrone and is among the biggest and most respected names in the genre's history.

This edition of 'All Tomorrow's Funerals' is presented on double gatefold vinyl.