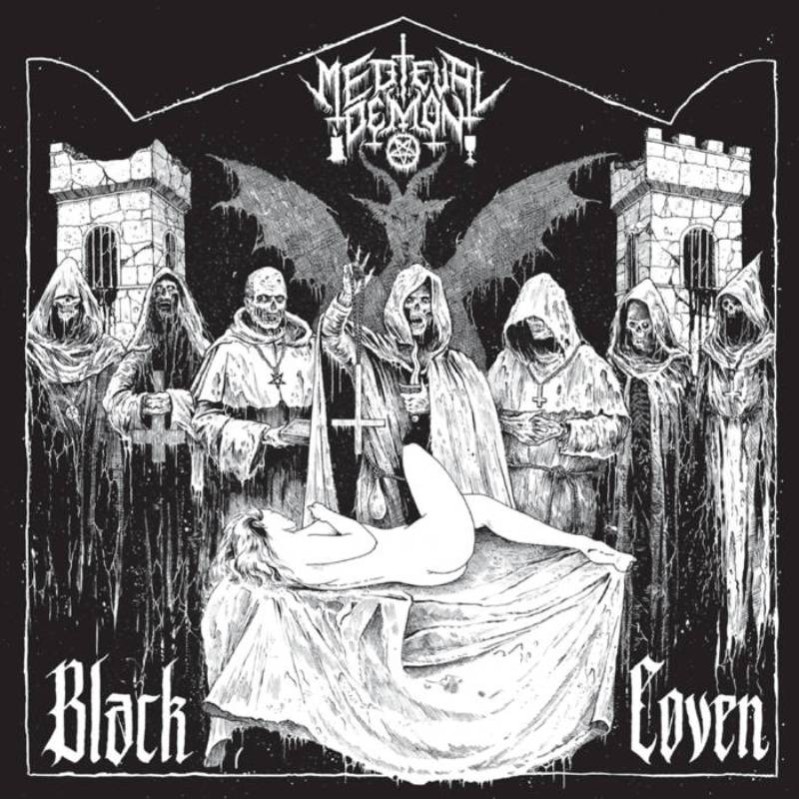 By now, MEDIEVAL DEMON should require little introduction. Formed in that fateful year of 1993, MEDIEVAL DEMON remained one of the cultest entities of the immortal Greek black metal scene, releasing a handful of demos during the mid '90s and then their lost-classic debut album, Demonolatria, in 1998. Not long after, the band receded into the shadows, in vampiric slumber, until awakening from the crypt in 2018 with the majestic comeback album, Medieval Necromancy, through longtime fans HELLS HEADBANGERS, followed two years later by the equally acclaimed Arcadian Witchcraft.

Continuing that enviable momentum compared to most "old" bands who tiredly rehash long-faded glories, MEDIEVAL DEMON light another new full-length torch with Black Coven. Just as its esteemed predecessors sounded like those glorious '90s never ended, so, too, does Black Coven burn with an authentically eldritch fire by those who truly LIVED IT. Much as canonical Hellenic black metal always prized heavy metal classicism at the heart of black METAL, MEDIEVAL DEMON once again synthesize such with equally-classic horror and high drama, making Black Coven arguably their most widescreen record yet. The production, in kind, gives robust crunch to that heavy metalized songwriting, along with highlighting the band's always-captivating synth work. Indeed, the album sounds EXACTLY as it should for something titled Black Coven: the ancient spirits are legion, and unbound!

As founding drummer/keyboardist/composer Lord Apollyon explains, "For the composition of Black Coven, there were used methods and practices of the ancient Greek theory of music, which were also used to the Middle Ages - in the name of Satan. Composition in black metal presupposes to live in real time the process that includes all the elements involved in this kind of black art. We moved into an isolated village inside the forest, a place where ancient Greek sorcery and death magic was born. Ritualism and ancient black metal are parts of our eternally black souls."

Specifically, opening track "Where Witches Dwell and Labyrinths Confuse" was written as tribute to the deceased Andrea Meyer of Norway's cult Aghast. Likewise, the unabashed use of saxophone was in tribute to founding Greek forebears Necromantia, who entered the crypt of time eternal last year. And of course, the influence of Italian gods Goblin is never far away from MEDIEVAL DEMON, even if that influence is more spiritual rather than literal. Any way you cut it (and try not getting mesmerized by the choirs here!), Black Coven is cinematic black art at its very finest. Last word, then, to Lord Apollyon: DEATH TO THOSE WHO BETRAY THE SECRET CULT!"