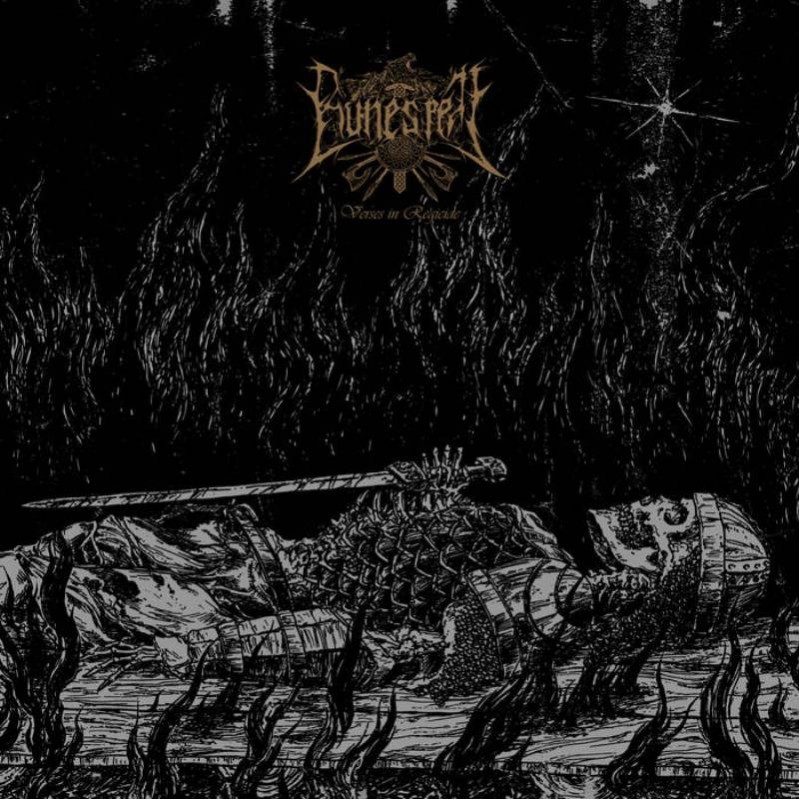 Could RUNESPELL very well be the best or at least most compellingly consistent black metal bands of the last five years? Verses in Regicide is irrefutable evidence in the affirmative.

By now, RUNESPELL should require little introduction. Since this Australian entity's public unveiling in 2017 with the Aeons of Ancient Blood demo - released by IRON BONEHEAD, as well as all successive recordings - RUNESPELL has sharpened its sword and quickly, with three albums arriving like clockwork every year: Unhallowed Blood Oath (2017), Order of Vengeance (2018), and Voice of Opprobrium (2019). That's not to suggest that mainman Nightwolf is hasty or careless with his creations; rather, the RUNESPELL aesthetic is so etched in iron, so forged in blood, that this mystical & mesmerizing soundworld takes on its own life. A split LP with the reanimated FOREST MYSTICISM arrived last year, tiding the faithful over until the next full-length.

At last, it arrives in the form of Verses in Regicide. Arguably RUNESPELL's best-produced and -executed album to date, Verses in Regicide is highly familiar in one sense - grandiose melancholy given majestic flight, bloodlusting energy no matter the tempo, widescreen in its vast landscapes yet fiercely focused - but reveals a subtly newer side. Melody has always played a prominent part in the characteristic RUNESPELL riffing - equal parts classic Scandinavia, France, and Poland - but there's a multi-layered shadow of scintillating scales here that dazzles the senses and pulls even harder at the heartstrings. It's deceptively straightforward, but boundlessly deep; it likewise feels more urgent than ever while seemingly coming from a cosmos many realities removed. Put another way, Verses in Regicide is second-wave black metal born from the elements, where earth, water, and fire forge a new destiny when wielded by such expert hands as RUNESPELL's Nightwolf. And of course, those plaintive acoustic tracks, here aptly titled "Into Dust" and "Windswept Burial," chill to the fucking bone.

Could RUNESPELL very well be the best or at least most compellingly consistent black metal bands of the last five years? Verses in Regicide is irrefutable evidence in the affirmative.