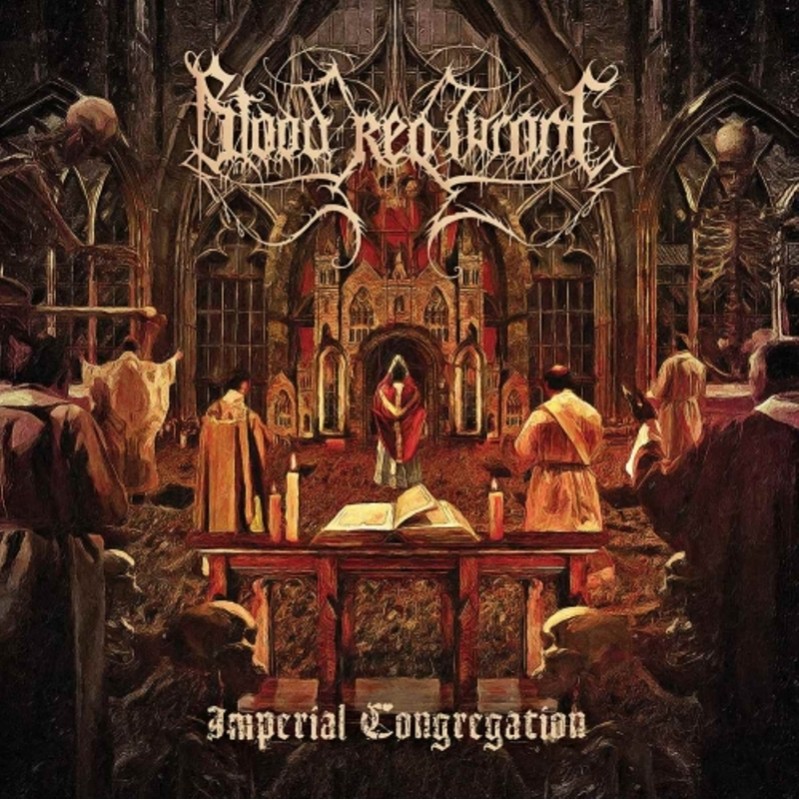 Their new album, IMPERIAL CONGREGATION, delivers quality, old school sound while reflecting in part upon the self-righteous nature of humanity; its incessant need to destroy itself through power, ignorance, and religion. “We live outside this system,” explains founder and guitarist Daniel Olaisen. “We don’t join in on the sheep mentality. Create your own possibilities, be responsible for your own misery or success!”

In many respects, the dawn of the new decade 2020 drew humanity back into some of the most tumultuous corners of the dark ages, yet Death Metal Purveyors BLOOD RED THRONE found themselves swarming with inspiration. Their new album, IMPERIAL CONGREGATION, delivers quality, old school sound while reflecting in part upon the self-righteous nature of humanity; its incessant need to destroy itself through power, ignorance, and religion. “We live outside this system,” explains founder and guitarist Daniel Olaisen. “We don’t join in on the sheep mentality. Create your own possibilities, be responsible for your own misery or success!”

The haunting, organic album artwork was designed by the infamous Marcelo Vasco. The image displays a flock of old, religious men as they meet in secrecy to design the laws of lower society. “Many of our lyrics deal with our skepticism of religion, and of mankind in general. Be free or be dead,” exclaims Olaisen. Two gigantic skeletons tower over the men of worship as they dictate human fate by candlelight.

Songs like “Conquered Malevolence” breach this exact subject; that we’re taught to melt into society’s norms, not to lead, but to follow. “It depicts a person’s way of growing strong, and finding him/herself; to be who they are and to find that true happiness comes from inner satisfaction. It leaves you with less of a craving for wanting more, and for caring about what others have,” explains Olaisen. Musically, the song immediately takes a leap back into 90’s death metal with a pristine upgrade in production. The searing vocals and hypnotizing guitar-work battle alongside a monstrous low end to deliver a distinct, and classic composition.

“Transparent Existence” switches things around with a groovier edge; deranged, eccentric melodies entangled with perfectly patterned drumming and vocals that hollow your skull. The lyrics are vocalist Yngve "Bolt" Christiansen’s thoughts on what it means to be systematically deprived of individual freedom. “How you will forever reach for something more, but without having the mindset or will to follow through,” explains Olaisen.

Communication and technology are an essential part of what made the writing and recording of IMPERIAL CONGREGATION possible in the wake of a worldwide pandemic. The freedom of tracking from the comfort of home was a huge advantage. One by one, each member recorded the guitar, bass, and vocal pieces in Olaisen’s home studio in Norway. “We all know our stuff, and know how we want things to sound,” he describes. Drummer Freddy Bolsø then completed his segments from his personal rehearsal space, and eventually everything made its way to Ronnie Björnström at The Mixroom - Enhanced Audio Productions, for mixing and mastering. “This is the first, but definitely not the last time we use Ronnie,” explains Olaisen, “we’ve never sounded as good as now, this dude is the shit!”

With over 25 years and 10 albums soon to be under their belt, BLOOD RED THRONE is dedicated to the continual delivery of straight forward, exceptional death metal with IMPERIAL CONGREGATION being no exception. “This time around we’ve made something new and fresh in our sound. We felt it from the very first song that was written; this will take us to a whole different level in terms of arrangements, riffs, vocals… everything. We are super-excited to share this with our fans, and in cooperation with the greatest label ever,” Olaisen exclaims.